This little “tail” of Stone Otter is the culmination of my first months here in Suquamish: every enchanting moment of prayer in the forest; every stroll on the beach at Old Man House; every shell and stone picked up; every brisk swim in the Salish sea; every otter sighted; the black bear in the yard; the people I have met; all of the song, dance, pageantry and ceremony of the Chief Seattle days celebration; every offering made to and song sung with the ancestors…It all comes together here in this simple truth and I share it in gratitude.
And let me not forget the great Red Headed Woodpeckers!

The Tail of Stone Otter

Along long time ago…or was it yesterday?
Otter Woman was due to give birth to a huge generation of young. She was great with child, filled with life, all swimming in her holy womb; which is the sea! And so, to nourish and sustain the lives she carried within, she became ravenous and was required to eat ginormous numbers of fish, shellfish and crustaceans. Throughout this time, she had insatiable cravings; the likes of which all women who have ever born a child into this world know. Her personal “pickles and ice cream” were shellfish and crustaceans; she just could not get enough. In trying to do so she altered her own biology and turned to shell herself. In this way the multitude of unborn children she carried within were turned into baby clams and crabs; thus insuring the food supply of her otter children for generations to come. As a shell she no longer needed her legs, paws or tail for swimming, and so they fell off. Henceforth she was destined to roll in the surf; and that is why shells and crab claws, when they are no longer needed to protect what has become food, can be found rolling in the surf. And why we must remember that whenever we go to the seashore and pick up a shell, crab claw or stone, that we are actually taking away a handful of the future’s sand and do so in reverence and gratitude. And to look carefully inside to be sure that none of Stone Otter’s children are still hiding there for protection; that they may grow to live, reproduce and die in the sea as is the want of their Mother, Stone Otter; or as She is also known; Great Mother Sea: She Who Feeds Us All.

My receiving the “tail” of Stone Otter is the result of a simple act of faith. I had been making Otter Women ocarinas; each one intended to hold aloft a small concha (shell) lovingly collected from Old Man House Beach. In this way when the ocarina is played it suggests visually that it is Otter Woman Herself who sings out to the Ancestors. I had finished my first three, each one sculpted of the moist flesh of Mother Earth over a two day period and had also completed my first rattle; she holding a tiny bivalve in her hands as if shaking Her own ceremonial rattle. Now, the spirit of Otter has me just where She wants me, in the palm of Her holy hands, and it is She who will play me like the hollow spiraling concha She knows me to be. I have been pinching and sculpting this holy flesh of Mother Earth for over 30 years and have learned to recognize certain moments of magic. I attach the arms to my little Otter Woman rattle and they refuse to do my bidding, so I pull them off and begin again. A second time I attach her arms and for the second time they refuse to comply. I remove her arms again and wonder how it is that I, a pretty good potter, am unable to complete a relatively simple task? And so for a third time I begin. The clay, which is to me the Dearly Beloved, feels like a stranger in my hands. As I remove her arms once more my entire being is one giant question mark. And I hear myself say, “She doesn’t want arms. Otter Woman doesn’t want arms!” And here I must move forward in faith to honor the spirit of Otter, who holds me in Her holy hands just as I hold the clay in mine. But also to honor my personal vision; I must follow this holy thing in faith. All the while pretty sure that no one is going to want to buy an Otter Woman rattle that has no arms or tail, but never faltering in the knowing that this sacred vision that I carry is worth more to me than material security. It is during the quiet, meditative work of finishing this little rattle that the story is gifted to me from the Spirit of Otter and the Ancestors of this holy place where for now I dwell. I refer here not just to Suquamish, arguably the most heavenly place I have ever lived, but also to Our Mother Earth, provider of all.

The Tip of The Tail

It is the elusive tip of the tail of The Spirit of The Black Jaguar: She who not just dwells in, but is The Living Spirit of The Great Void, that I have followed all these years. She gives me hope and strength to continue moving forward in a world on the edge of completely devowering; that is rejecting, through wonton consumption, our sacred vows and responsibilities to the oneness of all life, to the determent of all life. 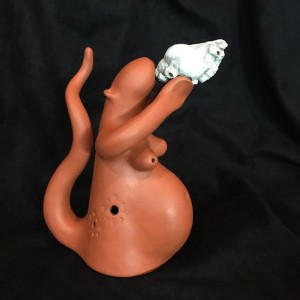 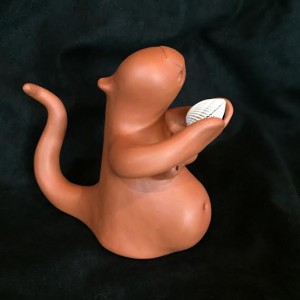 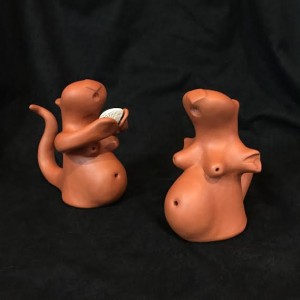